By Laura Gardner, Research Assistant for the School of Fashion and Textiles

The School of Fashion and Textiles celebrates our successes from these last few weeks. We’ve received extensive media coverage from the Business of Fashion (BoF) global rankings, participation in Melbourne Spring Fashion Week (MSFW) events and recognition with awards. We’re pleased to share these ‘grand’ moments:

The Business of Fashion Rankings

RMIT University, as featured on the Business of Fashion

The announcement of the Business of Fashion’s annual university rankings recognised, once again, RMIT as the number one School in Australia and as a leader in global fashion education. We’re excited to announce the School’s Undergraduate ranked at 17, and Post Graduate ranked at 12.

This year, results were subject to an increased group of 54 participating institutions, an increase from last year’s 24. Results which meant that the School has gone from being in the top 37% to the top 31% for Undergraduate, and from the top 25% to the top 22% for Post Graduate.

Michael Beverland (Professor of Fashion Enterprise) endorsed the rankings and their global value for the School: ‘Measures of esteem like the BoF rankings (which critically involve input from students and employers) are a measure of a school’s reputation. The rankings highlight that it is RMIT’s unique blend of practice, design, science and enterprise that are valued by its alumni and industry partners, and that these are of a global standard.’

The Post Graduate program received particular acclaim with the ranking of 12, Kate Kennedy (course leader of the Masters of Fashion Entrepreneurship) commented that, ‘We were pleased that the course has improved position in the global ranking from the top 25% in 2015, to the top 22% within a much larger cohort of graduate global fashion education providers. This is a great outcome and shows our reputation within the global market alongside other top and established institutions such as LCF, Bunka and FIT.’

This is another extraordinary result for the School at an MA and BA level, congratulations everyone.

The annual Melbourne Spring Fashion Week featured RMIT’s Emerging Designer Showcase, which was held on Sunday August 28 as part of the runway program. The event was a huge success providing a creative platform for the Bachelor of Fashion (Design) (Honours) final year students to show their work to industry, family and peers.

From the wattle-inflected Australiana outfits of Alexandra Kirkwood, to the deconstructed negligees of Elisa Keeler‘s collection, the students pulled off a thrilling mix of innovative and creative work.

Stephanie Henly represented RMIT in receiving the MSFW Emerging Student Designer Award, a prestigious prize which includes a 12-month mentorship program with the Council of Textile and Fashion, an internship with a leading Melbourne brand and inclusion in the MSFW 2017 Creative Collective Exhibition. Stephanie shared with us her thoughts on the event, ‘As an emerging designer the parade offers a platform to show your designs to the public eye, as well as working with the MSFW team in a runway context. The experience gave me a fantastic insight into the organisation, communication and team effort it takes to both design and showcase in a fashion runway setting.’

Watch the collections in action in MSFW’s coverage of the Emerging Runways here:

RMIT’s involvement with MSFW didn’t end there, Bachelor of Fashion (Design) (Honours) students took over Melbourne Central installing their work as part of Vogue’s Fashion Night out on August 26. The install went across the levels of the shopping centre, from the encased garments on Level 2, to the film screening on the Lower Ground. 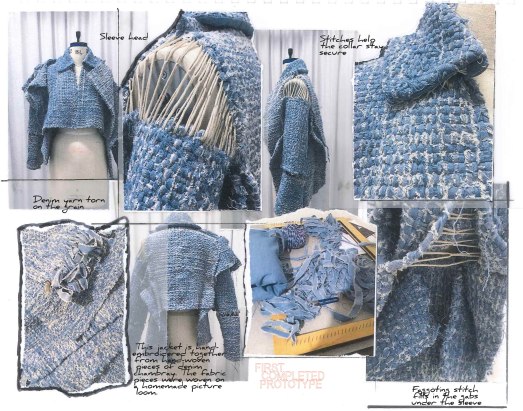 In addition to other MSFW happenings, DIESEL’s Emporium store hosted six students to display their work from the RMIT Diesel Denim Re-Fuel’d studio project. The studio was created as part of the Bachelor of Fashion (Design) (Honours) program, led by Tania Splawa-Neyman and Kate Sala in collaboration with Artistic Director of DIESEL Nicola Formichetti and President of OTB Group Renzo Rosso, who visited Melbourne as guests of Virgin Australia Melbourne Fashion Festival (VAMFF) earlier in 2016. The studio concluded by offering an internship to two students, Paris Moschis and Yue Chen. Both of these young creatives will travel to Italy in early 2017 to take part in a design internship at DIESEL’s headquarters in Breganze, Italy, under the watchful eye of Nicola Formichetti and the Diesel design team.

MSFW: Melbourne Conversations: The future for designers and the next generation

Alongside the undergraduates, Head of School, Professor Robyn Healy and PhD candidate, lecturer and fashion designer Cassandra Wheat (Chorus) represented RMIT in the event ‘Melbourne Conversations: The future for designers and the next generation’ as part of a n industry seminar series held across the MSFW at the RMIT Design Hub. The panel, lead by Robert Buckingham (Creative Director of Melbourne’s MPavilion) with designer Lisa Barron and Jeanswest CEO Mark Daynes, raised the poignant questions around the future of Melbourne’s fashion industry, in terms of small business enterprise, education and local and sustainable manufacture.

2015 BA Textile Design Graduate Michelle de Castro has won the DIA’s AGOTYA (Australasian Graduate of the Year) for the Fashion and Textile category.

Michelle won the VIC/TAS GOTYA (Graduate of the Year) earlier this year, which put her in the running for the overall national AGOTYA prize, judged by a separate panel of design industry leaders.

See link here to her submission and further details of the winning folio and projects.

One of the design briefs from Michelle’s folio submission as shown on the DIA website.